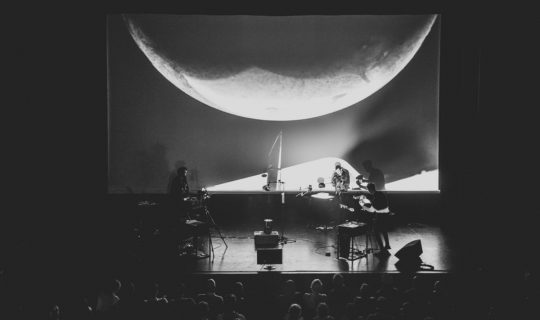 Elie Blanchard (FR) -aka Yro- and the German artist group Transforma are the minds behind BSYNYHOME, an environment composed of kinetic installations, incomprehensible instruments, video cameras/projection and objects resembling primitive organisms, geologic finds or artifacts forms. The performance is structured in three parts. In the beginning, the audience can observe the stage arrangement in a balanced loop. In the second part, three performers enter the stage, observe, interact and transform the system. In the final part, the stage set-up changes completely to produce an altered loop. The interplay between the actions of the performers and the elements of the kinetic system on stage create a functional choreography.

Yro is a multidisciplinary artist from Paris who blends music & video in performances and installations in which new technologies and low-tech are coexisting. His work also plays on image and sound links by using, transforming and shooting tangible materials such as paper, glass, engines or even light.

Transforma was founded in 2001 by Luke Bennett, Baris Hasselbach and Simon Krahl. They met while studying experimental film and media at the Berlin University of the Arts and soon moved from making videos, sound works and images to installations, live cinema, and performance.