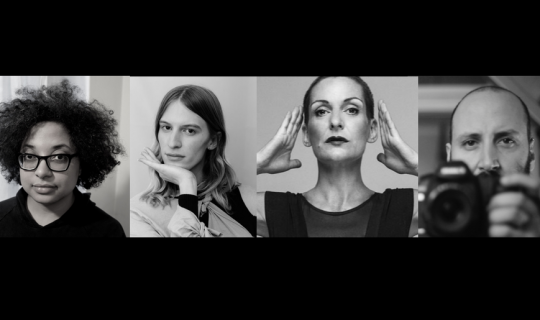 Inside MIRA Berlin’s Conference Program, gender diversity is one of the main cultural topics of our society, and we can see this reflected in the creative fields. Technology is nowadays the main communication channel that lets us spread information and allow different points of view. How does this influence the artist’s practice? How is the audience engaging or receiving artistic statements that fight for this diversity? As artists, are we able to change or transform different points of view? Is technology really helping to create a more tolerant debate?

Leil Zahra Mortada is a transfeminist queer activist and filmmaker, born in Beirut. Leil has formed part of several alternative media groups and political collectives in Lebanon, Egypt and the Spanish State, as well as on international level. Their work has a major focus on gender, documentation, freedom of movement, protest, discrimination, and post-colonialism. They have helped found various groups that crossed a milestone in the respective countries; such as Helem (the first official LGBTIQ organization in Lebanon), and OpAntiSH (a grassroots network to combat mob sexual assaults in Egypt). Leil has participated in various documentation projects around human rights and social justice mainly in the Palestinian refugee camps in Lebanon, in post-war Iraq, and most notably in their “Words of Women from the Egyptian Revolution” – an archival project documenting the participation of women in the Jan 25 revolution.

Lyra Pramuk is an American singer, composer-producer, and performance artist, Lyra Pramuk’s work is far-arcing by necessity, accomplishing a remarkably broad practice with a brevity of movement. Lyra works on an ongoing international performance schedule and has worked on various projects with musical collaborators such as Holly Herndon and Colin Self and visual artists like Donna Huanca. Lyra works on recorded music as well as performance in the orbit of electronic music and the elemental assets of philosophy, theatre, or folk-musical histories. Lyra is based in Berlin, Germany. She is a member of the Programming Team for Ableton’s Loop Summit for Music Makers.

Mic Oala is a cultural producer, creative consultant and queer activist based in Berlin who works internationally at the intersection of politics, music, fashion, and art. Besides consulting cultural institutions, brands and artists, Mic produces the Berlin Voguing Out Festival, organizes a variety of community events, is volunteering for Black Lives Matter Berlin and is committed to supporting queer art(ists).

Diana Arce is a Dominican-American artist and researcher living in Berlin. Her latest project, White Guilt Clean Up, is about dismantling white privilege and supremacy with online and offline services. She is the founder of Politaoke, the nonpartisan political speech karaoke bar and Artists Without a Cause (AWAC), a non-profit that develops collaborations between activist-artists and social justice groups. AWACs latest collaboration  “Wählen Gegen Rechts” or “Vote Against the Right”, fights the right wing on all fronts.

“Diversity & gender in music, digital art and technology” will be moderated by Estela Oliva.