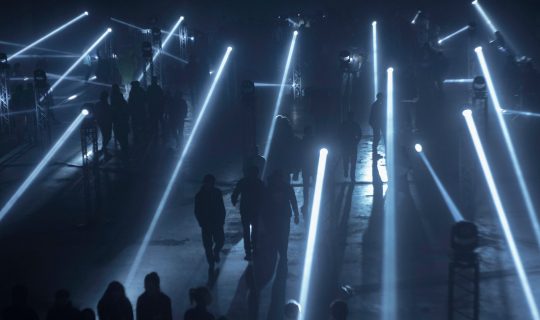 At MIRA Berlin they are premiering ‘Hyperjump’ in the German capital. It is a light & sound kinetic sculpture -placed in the Record Hall 2 of the Funkhaus- that explores a particular idea: a basketball court representing the physicality from nature, together with the architecture of the classicism period, the symbol of the human rationality. 25 moving head light beams on a truss stands and a powerful sound system were installed along the hall. While the light sculpture started to move, the electronic light devices came to life, turning into the actors themselves, bringing the light, shut in the strict geometry back, to its unpredictable nature.